By Michael FitzmauriceNovember 5, 2017No Comments

With regard to the recommendations from the Citizen’s Assembly on climate change over the weekend I will be seeking clarification as to the membership of the Assembly and how many of those people have a rural or farming backround.

I am asking the question just how representative of the general population are the 100 people on the Citizens Assembly and the make up of the body. For just 100 people to make such major and far reaching proposals on behalf of the entire population is not ideal in any way shape or form. I am asking all politicians and all parties to clearly state their position on the proposals from the Assembly over the weekend particularly those with regard to farming, the proposal to charge farmers for greenhouse gasses, and a reduction in the national herd.I will be carrying our my own analysis as to the cost of the proposals from the Assembly over the next week and I will publish those figures.

We know where the Government stand as the Minister has already welcomed all the proposals from the Assembly in a statement. In the meantime I am calling on all parties and all independent TD’s and Ministers and especially Fianna Fail who are propping up the Government, to come out and state clearly where they stand on the proposal of farmers having to pay for the greenhouse gasses that their activities produce. I want to hear where they all stand on the proposed planting of rural Ireland and run down of the small family farm in particular which will be an inevitable consequence of these proposals.

It is time that politicians on all sides stand up and make their views known so that farmers and people living in rural Ireland know where they stand. I will be following this most serious matter up with great interest this week. 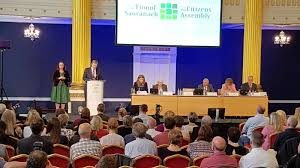