Taoiseach So Arrogant On Loss Of Banking Services In Rural Areas

By Michael FitzmauriceSeptember 11, 2017No Comments

The comments from Taoiseach Leo Varadkar in Ballymahon on Friday when he said that an improved broadband service will make up for the loss of banking services in rural areas shows breathtaking arrogance and a total lack of understanding of rural Ireland.

The Taoiseach reckons that improved broadband will make up for the loss of banking services in rural areas. I’d ask the Taoiseach does he realise that there is a large cohort of mainly elderly people who have never owned a lap top, ipad or computer in their lives? Improved broadband makes no difference to them at all. What these people want is to be able to go into their local bank and talk to an actual person to do their business. Instead the banks are either closing branches down or forcing people to go online and in many cases elderly people do not know what to do and are confused and worried.

Remember that these banks were bailed out by the Irish people after their actions helped to bankrupt the economy and now this is how they are treating their customers. It would be more in the Taoiseach’s line to rein in these banks and tell them to provde a proper service rather than dismissing the fears and concerns of many people in rural areas. I am also interested to hear the comments on this matter from Rural Affairs Minister Michael Ring. Surely he does not agree with the run down of banking services in rural areas. An improved broaband service will be welcomed by those who are able to use it but for many it means absolutely nothing. 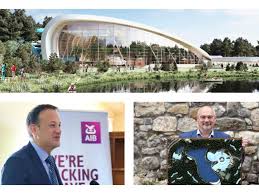