Slurry Spreading Deadline Must Be Extended

By Michael FitzmauriceSeptember 22, 2017No Comments

In light of the very wet month of August and also September (so far) that we have had, farmers are still trying to get grass and had only a day and a half of a window of good weather to do that last week. Slurry is still in the tanks and needs to be spread before the cattle go into the sheds.

I am appealing to those in authority to announce an extension to the deadline as soon as possible and not leave it to the last day or two as fields will be badly cut up if farmers spread slurry on the land the way it is. The nitrates discussions with the EU are over and it should not be used as an excuse as it was last year. The West of Ireland has been particularly affected with marginal land unusable at the moment and even top quality land needs time to dry out.

We do not want to see slurry being spread on soggy land which would mean the possibility of run-off, so the extension is not only needed for farmers but for the environment as well. I am asking the relevant Ministers to address this situation immediately and I am also appealing to the main farm organisations to lobby for these extensions and not sit on the fence until it is too late as per usual. We need an announcement on this as soon as possible. 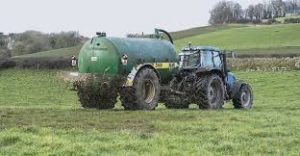