By Michael FitzmauriceAugust 24, 2017No Comments

While the Action Plan For Rural Ireland contains many laudable aspirations, claims this week that 95% of the actions promised in the plan have been carried out or are in progress is wildly inaccurate. The facts are that many of the aspirations in the plan have been announced by other Ministers at least once over the past number of years.
Claims today that the plan has been a runaway success is simply inaccurate and initiatives like the Glas scheme for farmers, the housing plan, actions on flooding, the National Broadband Plan Plan and many more proposals have already been announced by Ministers over the past number of years and are not new.
Only today a survey has found that 46% of parents are of the opinion that their children’s education is being affected by poor internet access at their schools.Most of the complaints come from rural areas. In our own constituency I have been contacted by schools who do not have an adequate broadband service despite the fact that there is broadband available a kilometre or less away. With regard to Glas, there are still many farmers who still have not been paid and there have been many problems with that scheme from it’s inception. These are just two examples of the many problems in rural Ireland.
It is also claimed today that 53,000 new jobs have been created under the plan but there is no way of knowing whether these jobs are in urban areas or are actually in rural areas. Unemployment in rural areas is still a huge factor as young people flood into Dublin and the bigger urban centres. There is a lot or spinning going on with regard to this plan and I have to say that I am surprised at Minister Ring who is usually a straight talking politician.
Any plan that seeks to improve the lot of Rural Ireland is welcome and there are many good aspects to the plan, but the situation on the ground is that many of the actions promised have either been delayed, in the case of the broadband roll out or have been up and running for a number of months and years past. Everyone wants progress and development in rural areas but announcing the same actions two or three times will not help to solve any problems that exist. Remember too that we have two senior Ministers in the West in Rural Affairs and in Communications. 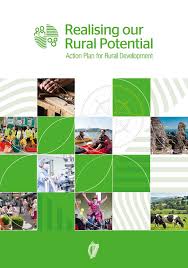