By Michael FitzmauriceAugust 15, 2017No Comments

Having being in existence for 40 years a review is needed of the way An Bord Pleanala is operating given the slow pace of it’s decision making, especially in recent years.

I am calling for the review in light of the very slow pace at which the Bord is operating and some of the huge infrastructural projects that it is deciding upon. For instance the plan to develop Galway Port has been has been held up for over three years which is totally unacceptable. Other development plans allover the country are also being held up because it is taking the Bord so long to make decisions.

In 2006 An Bord Pleanala was given the power to adjudicate on major infrastructural projects and the idea behind that was that these major projects could be speeded up through the planning process but now it appears that the opposite has happened. We as a country are sending out the wrong signals in this regard and there is a view internationally that it is very difficult to get planning permission to develop major business ventures in Ireland. If that is the case then we are going to be in trouble trying to attract Foreign Direct Investment. Either we are serious about wanting to develop the economy or we are not.

There are smaller projects also suffering too. For instance I am aware of a proposed chicken rearing facility which has been held up time after time by An Bord Pleanala. These are jobs in rural Ireland and we have to act on this situation now

In operation since 1977, it is time for a major review of how An Bord Pleanala operates and if we need to bring in more legislation that would speed up the planning process for major infrastructural projects then so be it. We cannot have these major proposed developments with huge job creation potential being held up in red tape and planning difficulties and we need a new and much quicker and simplified system. 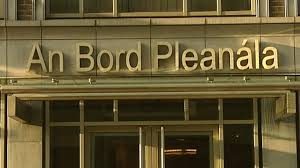