By Michael FitzmauriceNovember 21, 2016No Comments

The action of fisheries board personnel in stopping remedial works in the Brackloon area of County Roscommon at the weekend is a disgrace and it is time that some of our public bodies put people and their property first in the struggle against possible flooding.

When will different public bodies realise that people’s lives and property are paramount ? We all remember almost a year ago right across the West of Ireland when we saw the devastation caused by flooding to houses and businesses and whole communities were affected. We were told after the flooding that things would change and remedial work would be done . We as pubic representatives have fought constantly for these works to be started, and in fairness to Roscommon County Council, a digger started work in the Brackloon area last week and was doing a good job. Then, over weekend I understand that they were told to stop by the fisheries people”

I have worked all over Ireland on jobs on rivers etc, and it was always accepted that round bales of straw or boxes of square bales were used to reduce the danger of silt, and jobs were let go ahead because common sense was used . It is interesting to see on TV this week on a very strong flowing river on Westmeath, work being carried out, and rightly so too. But what is wrong in Roscommon that this job has been stopped ? The people in this Brackloon-Ballnaheglish area want this work carried out as they have suffered enough already. I am contacting the Minister this week to ask what is going on as I think that it’s a disgrace that these works have been stopped. Either we are serious about preventing flooding or we are not. 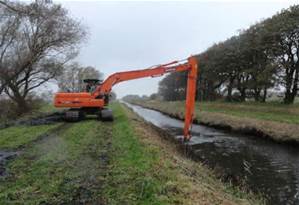