It’s time for the Government to get ruthless about solving the problems facing the problems with the ambulance service around the country and some creative thinking is needed on this critical issue that is a matter of life and death.
New figures from the HSE show that in some counties there are only two ambulances covering day shifts which is a totally unsatisfactory situation and to improve that situation will require creative thinking on a number of fronts . All new gardaí and firefighters around the country should trained as EMT’s (Emergency Medical Technicians), there must be a review of the air ambulance service, and I am also making a call for civil defence ambulances to be made available.
Either we want to fix the service or we don’,t and a bit of ruthlessness has to come into it at this stage. I know that you can’t have ambulances everywhere but all agencies involved here must think “outside the box. It was stated in the Programme for Government that there would be a review of the air ambulance service but it never happened, they never bothered, that needs to happen immediately” he said
We have ambulances in this country hauling non-emergency patients from hospital to hospital, and a lot of that work could be sub-contracted out to release ambulances. Every new guard and firefighter should also be trained as an EMT, that way we’d be giving communities a huge amount of options in different emergency scenarios. Civil defences around the country also have a lot of ambulances only used for football matches and festivals on Sundays and they are lying idle all week. They could be used as another back-up service.
We need the unions and bodies like the GRA to buy into this new system as well. If we had more people trained as EMT’s then the chances are that there would be a trained person nearby in the event of a stroke, heart attack or serious incident. We need an urgent review of the air ambulance service and I will be raising that matter once again this week. There are many things that we can do to improve the service and we must act without delay. It is a matter of life and death after all. 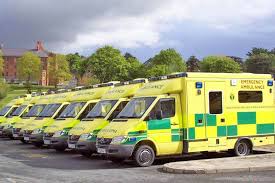