It is an insult to people who are earning low income to say that for instance a single person on 20,000 per year will be better off by a total of 53 Euro in the year and a married couple who are earning 35,000 a year will get an additional 91 Euro. So the people who get up early in the morning are being ignored despite what the Taoiseach has said. There was very little in this budget for the self-employed either and they are still at a disadvantage despite what we had agreed wheh we were in talks for the formation of this Government.

I welcome the rises in social welfare and pensions. But the fact that it will not come in until the 31st March is an election stunt in my view.

With regard to housing, there are promises of 1.18 billion for housing in 2018 but while that is welcome delivery of those houses is the problem. But we are doing absolutely nothing for the people in Middle Ireland earning 30,000 to 40,000 and who want to buy a house. There is a fund being put together for affordable housing but at this point we are looking down the road by at least two years before any significant housing will be provided. I don’t think that the government will deliver the 4,000 social houses that it has promised in this budget.

With regard to sports grants, people must remember that out of the Sports Capital Grants that were announced for 2017 not one single penny of those allocations have been spent. This is the game that’s going on. Things are being announced before anything has been put in place and it rolls on from one year to the next.

I welcome the 750 million Euro fund announced for commercial investment finance but I again ask the question, are they going to allow the credit uions to finance this, partly at least. Remember that they have 14 billion Euro in assets. That would keep the money here in Ireland rather than going to Germany or France to borrow. We cannot get a straight answer from the Department of Finance on this.

There were more teaching posts announced but remember that there are far more children in the country every year and the pupil teacher ratio has only gone down by one. I welcome the extra Special Needs Assistants but they are now subject to a school evaluation and not per child like it was in the past and a lot of schools are struggling in that regard.

I welcome the news of 800 extra Gardai but I will be asking questions as to how many Gardai are retiring every year and are we keeping up with those numbers with regard to retirements. I welcome the fact that civilians will be taken on to release more Gardai out in to the beat.

The annoucement that there will be funding for an additional 1800 staff in the Health Service is welcome but if we can’t recruit nurses up to now how are we going to do it after this announcement? I hope that all money allocated for mental health services is spent as the service is in disarray around the country. I am a firm believer that putting more and more money into our health servce will not solve the problems. We need a fundemental change in the way we deliver our health services in this country. I also welcome the reduction in prescription charges and the drugs payment scheme.

Some of the loans that we hear will be made available because of Brexit look like they will be availble to big companies only. We need to make sure that small SME’s are looked after too at realistic interest rates. Unfortunately there is a maze of paperwork trying to access some of these loans and we need to make it easier for people in that regard.

Most departments show an underspend for the year and it’s my view that the budget is mainly a PR stunt for the Goverment. We have seen rises in fuel, electricity charges, the PSO levy and other charges and when you do the maths most people end up worse off. That’s the reality. 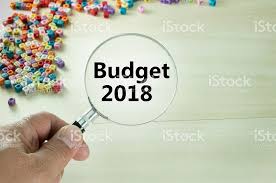