No Action Has Been Taking On Flooding Problems In Co Roscommon

By Michael FitzmauriceAugust 21, 2017No Comments

With winter on the way there are fears among members of the local community affected in the past by flooding that nothing is being done to prevent it happening again.
In the past week, along with Councillors Ivan Connaughton and Domnick Connolly, we met with a group at Correal including Seamus Naughton and James Moran who have been affected by flooding and who have suffered severe hardship. Nothing has happened to improve their situations since. We have all been working hard and have been in constant contact with the OPW and that includes the farming organisations who have put in submissions to attain the ratio of cost benefit analysis which I believe is achievable now.
Unfortunately the GSI surveys (Geological Surveys Ireland) are stalling any progress and as we move on to another winter the fears among the people affected are growing. They are fearful that the properties that were affected by flooding in the past and which they have refurbished since are now in danger once again. No matter how long you put down recording equipment in an area it may not be accurate over a short term so action is needed now.
There are solutions to the problems in Ballinaheglish, Correal, Athleague, Lough Funshinagh and Ardmullen, but the needless red tape that has been put in the way is holding up those solutions being put in place. At the end of the day I am convinced that, as was the case from day one, it will take a pipe to move the water from A to B and they are putting off the inevitable. In fairness to Minister Sean Canney the cost benefit analysis problem has been sorted out but one wonders whats going on with regard to the GSI surveys. 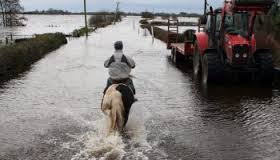