As most people now know now it was announced in the Budget yesterday that the sale of commercial land would be subject to a new rate of 6% up from 2% from midnight. I brought it to the attention of the Government that agricultural land would be included in this new situation and that was denied by the Minister

I got calls all day yesterday from auctioneers one of whom was local auctioneer Ivan Connaughton, and it finally emerged that agricultural land had indeed been included and is now subject to a rate of 6%. This will cost Irish agriculture 12 million Euro in one year alone. The Taoiseach Leo Varadkar might like to spend 5 million of that on his new communications unit but that kind of money cannot be found on the side of the road.

There are people who have secured loans to buy land who now have to go back and find out if they can they get more funds to pay the exra stamp duty. In the Dail on Tuesday night I put down a reasonable amendment that if land was bought for farming purposes and that a declaraton was received that the land in question was used only for farming for five years that the stamp duty remain at 2%.

I expected that amendment would have been supported by all sides of the house but unfortunately the Government did the usual and spun the story referring to state aid rules which was nonsense. The amendment went to a vote, the Government, the Independent Alliance and a few others voted against the amendment. Fianna Fail sat on their hhands and abstained, and the new rates were passed.

This measure is a huge blow for Irish agriculture.. The only hope I have now is that when the finance bill is published I am going to tackle this again with everything that I can muster. TD’s will have to stand up again and be counted because I will ensure that this matter goes to a vote again. 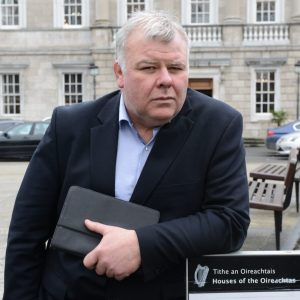