By Michael FitzmauriceDecember 12, 2016No Comments

The statement from Dermot O’Leary of the NBRU at the weekend that his union may have to accept some route closures in the negotiations on the future of Bus Eireann is very disappointing and I and other public representatives will be fighting hard to ensure that all rural routes remain open in any future plan.

The statement from the NBRU that they may have to accept some route closures in the talks about the future of Bus Eireann is surprising and disappointing and it seems to me that as long as the NBRU drivers are looked after, the service in general doesn’t really matter. Bus Eireann provides a public service and it is well known that there are routes that are losing momey and that’s where public subvention comes in.To have a proper public transport system for all we have to be prepared to pay for it as long as the costss are kept to a minimum. It has also been shown recently that the numbers of elderly people using some of the rural services has grown by up to 30% in recent years.

The National Transport Authority has been issuing licences to private operators on the busiest routes in the country which is fine but the less popular rural routes must be serviced as well as any major routes between our big cities and towns. Rural dwellers are entitled to a public transport system the same as any urban dwellers and they will have to be part of any discussions on the future of the bus service throughout the country. 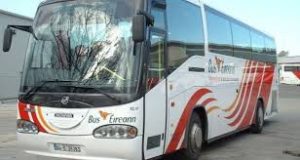