My Stance On Shannon Dredging Vindicated

By Michael FitzmauriceDecember 10, 2016No Comments

Having maintained for the past number of years that dredging and maintainance work on the Shannon anfd it’s tributaries was essential in the battle to prevent flooding my stance has finally been vindicated by the statement from the Government and Minister Canney on Friday last.

After two years of explaining to all the stakeholders that the River Shannon and it’s triburaties needed dredging and other work to be carried out to prevent future flooding, it is now heartwarming to finally hear on Friday evening that the Commission who are reporting on the Shannon and the Minister have now fully accepted that this work must be carried out and that the pinch points have to be removed. I welcome Minister Canney’s statement to that effect.

I sat in radio and TV studios all over this country over the past few years with various people who had authority over the Shannon and they kept saying that the river did not need to be dredged but I stuck to my guns right through. It was always my contentnion that not only the Shannon, but the Suck and all it’s tributaries have to have dredging and maintainance work carried out. The authorities have now admitted that if they don’t do something in this regard the Shannon will be blocked within 20 years.

We have to be realistic and honest with people, this work will not be done overnight and the authorities have said that they are putting a plan together. I have looked at the latest machinery available in the USA for this work and I am convinced that silt can be shifted on a three shift basis. I am also investigating machinery for shifting rock as well. Navigation levels can be maintained but they can be much lower. The cruisers can travel safely at a much lower navigation level and the level of water can be dropped by at least a half a metre.

There are signs now for the first time since 1996 of the beaches around Lough Allen. There should be no reason why we cannot drop the levels on Lough Allen by seven or eight hundred ml which would open up great tourism possibilities in that area as well as havig the cruiser traffic as well.

I note that the Minister has said that if he has to go to Europe to discuss this issue he will do that in case of any envioronmental concerns. I was in the EU dealing with this issue myself and they made it very clear that if you have a proper management plan for a river and that plan includes dredging or maintainance that they do not have a problem with that .But if they do have a problem and with all the directives that they have in place then another directive can be drawn up to look after the interests of the people of this country who must come first.

This is the first step and the first glimpse of hope and we have to capitalise on this and drive it forward because the Shannon and all it’s tributaries have to be prioritised now. One thing I do not want to see is a list of problems being put in front of the OPW by bodies like the Inland Fisheries. I have seen the derogation document that Roscommon County Council recieved in relation to the situation at Ballinaheglish and the River Jiggy, and the amount of different stipulations that there are before you are allowed to dig are intolerable and I will be asking Minister Canney to ensure that a lot of this red tape and codswallop is cut out. 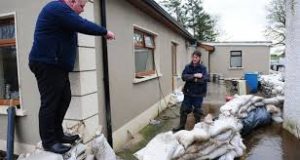