Independent Alliance Must Speak Out On Judicial Appointment

By Michael FitzmauriceJune 20, 2017No Comments

In the wake of recent controversies and especially in connection with the appointment of Maire Whelan to the Court of Appeal, the Independent Alliance have several questions to answer, in relation their role as part of the Government.
I have been critical of Fine Gael and Fianna Fail on recent issues but one must not forget that the Independent Alliance are part of this Government too and I am surprised that they have sat idly by while the appointment of Maire Whelan was allowed to go ahead without any opposition. Once again I am not calling into question the ability or suitability of Maire Whelan to do the job at the Court of Appeal but the way it was pushed through without any reference to three other judges who had sought the position, or the the established practice of handing these appointments, is totally unacceptabble,
Minister Shane Ross in particular was a vehement critic of the way judicial appointments were made for many years, but last week he sat at the cabinet meeting when this appointment was made and he seems to have given this his approval despite the fact that he has sought a review after the controversy blew up. The Independentt Alliance promised that in Government they would ensure that the executive was held to account.There is not much sign of that in this instance.
I know that there are some TD’s in the Independent Alliance that would not agree with what has happened here and they should speak out. The facts are that judicial appointments were held up for 6 or 7 months in recent times but then this appointment was rushed through before Enda Kenny left office. It is also a fact that two independent Ministers were sitting at the cabinet table when this appointment was made and apparently there were no objections. It is a pity that despite all that was said in the run up to the formation of the Government the politicians are falling into the same trap as we have seen before and nothing has changed..Fianna Fail have made a few half hearted protests but it does not suit them to trigger an election so everything will go on as before..
We have a Judicial Appointments Bill on the horizon now but as usual we are closing the stable door after the horse has bolted 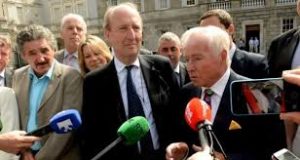