Incompetence Endemic In Government Departments and No One Accountable

By Michael FitzmauriceMay 15, 2017No Comments

Evidence of incompetence in almost every Government Department is growing with every passing day and it would appear that no one is ever held to account for any mistakes that are made and the situation just goes on and on.
We hear today that the Department of Defence sold off the LÉ Aisling for a fraction of the price the State could have received for the navy vessel. The ship was sold at auction in Cork for €110,000 earlier this year. It has been put on sale for a starting price of 683,000 Euro by the private seller in Rotterdam. It is fairly obvious from this turn of events that whoever valued this ship made a major error and now it now represents a serious loss of money to the state.
Will anyone be called to account for this? These monumental errors are being made in every Department and it is so frustrating as a public representative to be dealing with the fall out from these mistakes that are being made on an ongoing basis. No one is accountable and the incompetence goes on and on. This week it’s the LE Aisling and next week it will be something else. Unless we adopt a different culture of accountability in our public service and in Government Departments in particular then nothing will ever change. 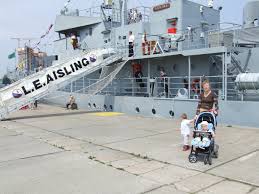