By Michael FitzmauriceApril 5, 2017No Comments

The Government have said that they want councils to find the cost of early pay restoration within their own funds this year and that is certain to lead to severe cuts in many local services and it’s a disgraceful stunt being pulled by the Government.

I am absolutely shocked and dismayed today to find out that it has been confirmed that the Government will not reimburse local authorities for additional payroll costs they will face after the public servants’ pay restoration timeline was brought forward, It means councils around the country will have to find millions of Euro from their own resources to cover the bill. This will mean additional payments of an average of 300,000 Euro to 400,000 Euro in every council area in the country and that money will have come come out of some area of expenditure which is scandalous. I will have the exact figures on this for every council area later, but it is a huge figure nationally.

Every council in the country agreed budgets for the year of 2017 last November and December and the allocations for expenditure under the various categories was agreed. Now the Government say that the cost of pay restoration will have to come from existing budgets which will mean major cuts in expenditure on things like roads and other services which have been cut so much in recent years anyway without this latest shock news.

This is nothing short of thuggery on the part of the Government. I raised this matter earlier in the year with Minister Donohue and his answer was vague and unclear and now vital local authority services will have to be cut to pay for this measure. I will be raising this as a matter of the most extreme urgency this week.

No one begrudges the local authority staff their rightful entitlement to pay restoration and in fact I welcome it, but I and many others were of the understanding that this measure would be paid for out of central funds. It is no wonder that Minister Donohue wouldd not give me a straight answer to the question that I put to him on this issue earlier this year and this turn of events is disgraceful and will result in cuts to may local auhority services nationwide. Talk about leprachaun economics. Here it is in action for all to see 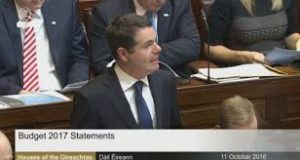