By Michael FitzmauriceNovember 24, 2017No Comments

Farmers have been abandoned by the main political parties, the Independent Alliance, and a few other Independents after the amendment to the Finance Bill proposed by myself on the issue of Stamp Duty did not receive the required support this week in the Dail.
Farmers are now left facing higher Stamp Duty after Fine Gael and Independent Alliance voted against leaving the Duty on land purchase at 2% and as usual Fianna Fail sat on their hands and abstained, and the only hope for a return to the status quo may be if the budget fails. It is now the only slim hope of this punitive measure being reversed .
We made the case in an amendment that for farmers buying small holdings up to 300,000 Euro Stamp Duty would remain at 2% and would be 6 % thereafter in an effort to help family farms. But it’s clear that Fine Gael, Fianna Fail and Independent Alliance and some other Independents are not interested in protecting rural Ireland and indeed family farms, and the need to attract the next generation to work the land. It seem that they are more interest in the return of the big landlords because that will happen now as a result of this higher rate.
. It was especially difficult to see Independent members of Government like Sean Canney, and Minister Dennis Naughten, who come from rural constituencies in the West of Ireland pressing the button for the Duty to be increased, and I believe that the farming community need to be made aware of the reality of what went on . Fianna Fail, if they supported my amendment could have halted this tax hike but they as usual abstained in this circus of voting patterns . It may not be the ideal time of year for elections, but it might be as well to give some in Dáil Éireann a reality check for their actions. 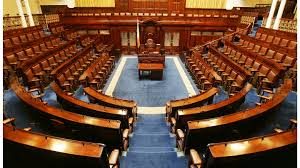