Galway Docks Development Proposal Welcomed And Should Be Supported

By Michael FitzmauriceMay 29, 2017No Comments

Plans for a major 100 million Euro office and retail development at the Docks in Galway City are very welcome and should be supported. The development has the potential to attract major Foreign Direct Investment and as a result could provide up to 2,500 jobs in the city in the near future which would be a huge boost to Galway City and the western region in general.
I would strongly support this proposal. There would be over 500 jobs provided in the construction phase of this development which would also be a big boost to the region. With regard to accesss and parking, it is hoped that the outer ring road for the city will be completed by 2023 and that in the interim there will be solutions found to traffic blackspots such as the Parkmore Industrial Estate. All political parties are talking about balanced regional development and this would be a good way to start in the West.
If we are serious about attracting Foreign Direct Investment to the regions then we have to provide office accomodation for major companies to locate and this development would be suitable for that purpose. With 26,000 square meters of offices space and 2,500 squarter meters of retail space proposed, Galway would become a very attractive proposition for major employers to locate. The facts are that there are many other cities around the UK and Ireland and in Europe out there looking to attract these big companies so we have to be able to compete in places like Galway.
I hope that this proposal gets a clear run though the planning process. Either we are serious about attracting jobs to the regions or we are not. If we want to sit on the shore and look out and admire the Atlantic Ocean for the rest of our lives then that’s fine, but if we want proper regional development then projects like this should go ahead. This development would show that we in the regions are serious about future development and about keeping our people in the region by offering them sustainable and attractive employment. 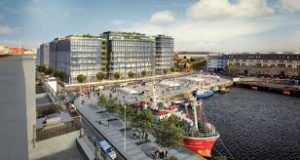