EU Warned To Stay Away From Ireland’s Tax Rates

By Michael FitzmauriceSeptember 14, 2017No Comments

Any attempt by the EU to change the voting rules so a majority of countries could vote to raise Ireland’s corporation tax rates to harmonise rates across Europe must be strongly resisted by the Government and our MEP’s.
Ireland is a small island nation and our corporation tax rates are one of the main reasons why Foreign Direct Investment comes into the country to aid the economy. Control over our own tax affairs is central to our economic policy and should not be tampered with in any way by the EU. Jean Claude Juncker, who wants to change the voting rules so measures can be agreed by a majority rather than a unanimous vote, is an unelected bureaucrat and under no circumstances should he be allowed to dictate what should happen with regard to tax rates in Ireland or anywhere else for that matter.
If this proposal were even to becone a reality then Irish people would have some serious decisions to make with regard to our participation in the EU. The simple facts of the matter are that if our corporation tax rates are brought to the same level as exist in countries like Germany and others then we can forget abour Foreign Direct Investment into this country. A lot of people might not like to admit that but it is true.
It is time that our Government stood up to the EU and Mr Juncker and show their total opposition to this type of dictatorship. We set our own tax rates and that situation must continue into the future and our blunt message to Mr Juncker and the EU is we won’t put up with dictatorship, and hands off our tax rates 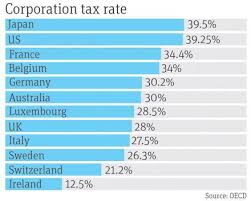