By Michael FitzmauriceMay 5, 2017No Comments

Deputy Eugene Murphy’s comments in relation to my proposal that a task force lead by local groups and be supported by government agencies and the local authority in the wake of the recent job losses in Ballaghaderreen were very disappointing and misguided.

It might be valuable to point out a few things to Deputy Murphy. Firstly, I might say that I did not think he would stoop to the level of political point scoring when 38 people have to face into the social welfare queue because they are losing their jobs. Anyone who would have any experience in creating jobs and employing people would not make the comments that Deputy Murphy did on this issue.

The Deputy has opted for the approach of going straight to the Minister, which is the standard and tired route. Raising these matters with Ministers, while it is part of the response, is a total waste of time that achieves nothing in isolation What does he expect the Minister to do that the state agencies charged with job creation cannot do? When he has spent a while more in the Dail he will realize that “going straight to the Minister” is in fact a cosmetic exercise if it is not accompanied by local input. Ministers in all departments are dependent on their department and agency staff to implement policy, that is the reality.

It’s disingenuous of the Deputy to suggest that meeting with the Minister will have any greater impact. Our colleagues in Fine Gael have organised a meeting between local Oireachtas members and the Minister. I believe that meeting could be worthwhile, but unless the agencies and local groups are involved it would be pointless too. That meeting will take now place on the 10th of May between Minister for Jobs, Enterprise and Innovation, local Oireachtas members, relevant State Agencies, Roscommon County Council along with representation from Ballaghaderreen Chamber of Commerce, and Ballaghaderreen Town Team.

Deputy Murphy implies that I am of the opinion that a task force will be a fix-it-all solution, but that is not what I said in my statement. What I suggested was that a task force be established and that it be lead by local groups such as the Chamber of Commerce and Ballaghaderreen Town Team. Having taken the time to research the matter this is what the local people told me they wanted. Unless all the stakeholders are involved we will make no progress.

The Deputy has also opted to focus on the inclusion of the IDA in my statement, conveniently ignoring Enterprise Ireland who do support job creation in rural regions and are an organisation which cannot be ignored in any future planning”.

What ever happened to new politics? I have been looking at the performamnce of the Government supported by Fianna Fail since they took office a year ago and many of the actions promised in the Programme for Government particularly in connection with rural Ireland have been ignored such as the situation with young farmers, the forgotten farmer, the plight of grain farmers, the Western Rail corridor, spending on rural roads, flooding problems, the upgrade of the N4 and N 5, and countless other commitments on regional development and infrastructure which remain unfulfilled. Fianna Fail are simply biding their time and they will continue to abstain and vote with the Government until such time as they feel will be the most suitable time for a general election, and that is no way to run a country.

If the Deputy feels so strongly that that this government has as he says himself buried it’s head in the sand in terms of regional development , then why doesn’t he stand up and be counted and vote against the Government? There are three buttons in front of the Deputy in Dail Eireann, a red one a green one and a blue one. It is time that Fianna Fail pressed red or green and started to actually make some decisions and not opt for the blue abstain button all the time which is a cop out. You cannot drive on both sides of the road at the same time, slating the Government on one hand and supporting them on the other. 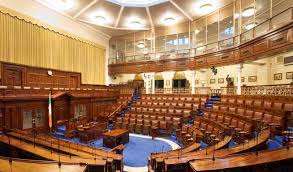