Decision Not To Extend Slurry Spreading Deadline Is Reckless

By Michael FitzmauriceSeptember 28, 2017No Comments

The decision of the Department of Housing Planning and Local Government to rule out an extension of the deadline for the spreading of slurry is reckless in the extreme and a further indication that there are many in Government whe simply do not understand Rural Ireland, the farming community and how to deal with the problems they are facing.

The reality now is that slurry will be spread on wet land and with the heavy rain we had on Wednesday and more forecast in the days to come, the possibility is that slurry will escape into rivers and drains around the country damaging the envioronment that we are constantly trying to protect. Obviously the people who made this decision know nothing about farming or Rural Ireland or the problems that farmers have had with bad weather over the past month or six weeks.

Even the most up to date technology using the pipe system for spreading will not work in the current conditions, Cattle have been inside since August began and tanks are full and now the Department are expecting farmers to spread slurry on unsuitable land that will threaten water quality. Even if the weather cleared up today the ground conditions would not be dried up in time for the deadline. The people who made this decision have not got a clue what is going on here and I am once again appealing to them to extend this deadline not only in the interests of farmers but in the interests in the Environment as whole. I am also asking the farming organisations to lobby as hard as they can to have this decision changed and have the deadline extended. 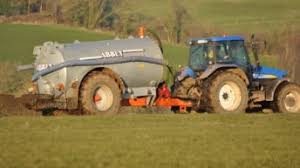