By Michael FitzmauriceMay 18, 2017No Comments

Recent comments from Minister of State at the Department of Agriculture Andrew Doyle on the matter, and news yesterday that illegally burnt land must be withdrawn from the 2017 Basic Payment Scheme applications must be clarified as they are causing much confusion and anger in farming circles.

If a farmer is directly responsbile for the illegal burning of land then I support the action being proposed but there are many farmers who could be penalised now that are totally innocent. There are cases where a farmers’ land might have been burnt and that fire may have started several fields away and he had no hand act or part in that fire. To penalise in that instance would be grossly unfair and wrong. In addition when it comes to commonage there could be thirty or forty or even more farmers involved in that land and the vast majority of those farmers would have had nothing to do with the fires.

In many cases farmers who are being penalised are actually the victims, and in fact some farmers did everything they could to prevent the burning of their land. I am requesting an urgent statement from Minister Doyle on this matter. It is unfair on farmers that had part in these fires to be penalised or prevented from applying for BPS payments and this issue needs to be cleared up immediately. 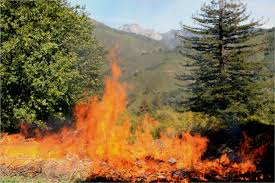