By Michael FitzmauriceSeptember 21, 2017No Comments

I was shocked to learn that Bord na Mona is to invest 60 million Euro in a new biomass plant in Georgia in the USA. It is a vote of no confidence in the Irish economy and our energy polic as we will now be spending huge sums on a major development in a foreign country.
Over recent years we have Minister after Minister in various Governments, and that included the Green Party, preaching about renewable energy and reducing our carbon footprint and our dependendance on fossil fuels. Yet we have seen that many of the new energy sources such as wind, are owned by foreign investors such as the Japanese.
In addition, it is well known that palm kernals have been coming in to the Lanesboropower plant from South Africa for many years past. What is the carbon footprint there I would ask? Now Bord na Mona, owned and supported by the Irish Taxpayer, intends to make this huge investment in the USA.
This will mean that the construction jobs for the plant will be in the USA the raw materials will be sourced in the USA and the workers will be from the USA as well. Then the biomass will have to be shipped to Ireland. We are constantly being told that we must reduce the 6 billion Euro we are spending on fossil fuels but I would ask what is the carbon footprint involved in this new development? And, that is quite apart from the loss of the investment to this country.
It should also be remembered that there is hot water discharged in the use of biomass at plants like Lanesboro means that the processs is not as effecient as it might be.
It is wrong that Bord na Mona are bringing this investment out of the country and the Government and the Minister seems to have lost control of the situation. The reality is that taxpayers are paying tarriffs and the PSO levy to suppprt alternative energy sources and a lot of that money is going out of the country. If the Minister and the Government want to keep jobs in the country then they should apply a simple rule that no energy investment supported by the taxpayer should leave the country. 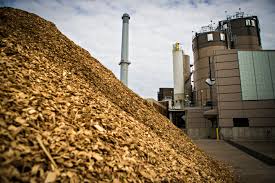