Authorities Must Exercise Caution With Regulations On Wind Farms

By Michael FitzmauriceSeptember 22, 2017No Comments

When the Government is drawing up guidelines for wind farms it must err on the side of caution when it comes to setback distances and local communities around the country. In some cases it is too late as completed projects have resulted in serious problems for residents in some areas around the country”.
We have heard lots about public consultation, but in many cases the public consultaton did not work. The Sliabh Ban development is a case in point where there are serious problems for some of the residents with regard to that project. People who were not opposed to the wind farm development and who did not object to it at all now cannot stay in their homes because of noise and flicker and in some cases flooding.
The question is are we more interested in following the EU guidelines to find alternative energy sources rather than looking after the interests of our local communities? It is the experience of many communities that a setback distance of 10 to one or 1000 meters for a 100 meter high pylon is generally acceptable and not the 500 and 600 meters setback that we commonly see around the country at the moment and which has the backing of Fianna Fail. Those setback distances have resulted in problems for residents.
With regard to Ireland sending money out of the country to pay for fossil fuels, much of our wind industry is now owned by foreign investors and by foreign countries. So much for keeping our energy investment in Ireland, and this was diven by the green agenda.
One thing that should be made very clear. there is plenty of ground around the country that is suitable for wind energy development and setback distaances of over a kilomere can be easily achieved but those areas may need roads built, and developers are reluctant to go to that expense.
Off shore wind energy is certainly a possibility for development in the future but for many local communities around the country the development of onshore wind farms is something that must be very carefully planned and we must err on the side of caution to ensure that people do not have problems when it is too late. 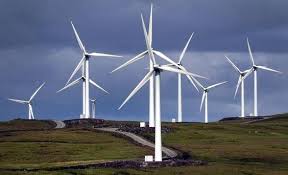