Another Urgent Appeal To Extend the Date For Slurry Spreading

By Michael FitzmauriceOctober 8, 2017No Comments

The Government will be the cause of environmental vandalism as a result of their refusal to ask the EU to extend the latest date for spreading slurry.
I have seen over the past few days fields being spread with slurry and those fields are not fit to take that slurry because it is so wet. I am,once again calling on the Minister and indeed the Taoiseach who claims that he will stand up for the people who get up early in the morning, to act on this immediately.
I do not want to hear farmers being blamed for a deterioration in water quality in six months time. I will not allow farmers to have to go through the nonsense of being blamed for poor water quality when this is the reckless way the Government are acting on this issue. The simple facts of the matter are that the politcians have not got the backbone to go to Europe and demand an extension. We have had two months of almost incessant rain and a lot of land is unsuitable for slurry spreading. It might be ok in the Golden Vale and in some other places in the country, but in the West of Ireland and other places it is largely marginal land we are talking about and I am asking once again for the Minister, the Government and the EU to see sense and for the deadline to be extended. 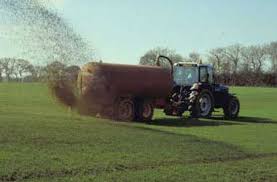