Ambulance Waiting Times In The West Must Be Addressed

By Michael FitzmauriceNovember 2, 2017No Comments

It is disappointing but not surprising to learn this week that the ambulance response times in the Western Region of Roscommon, Galway and Mayo, are the slowest in the country and this is a matter that I have raised constantly since I was elected, yet my pleas on this matter have fallen on deaf ears.

The staff who operate the ambulance service do a fantastic job but they are under pressure all the time becuase of a lack of recources and forward thinking on behalf of the Government and the HSE. For example, during the talks on the Programme for Government I propopsed,and it was agreed, that the air ambulance service should be expanded yet nothing has been done. There are far more aspects to this including short staffing and delays at A and E units to name but two. I have been raising this issue on a constant basis but the Minister and the HSE are not listening.

People in the West of Ireland deserve the same service as that available in other parts of the country. This is a life and death issue and it is time for the HSE and the Minister to stand up to the plate and address this ongoing problem seriously for once and for all. 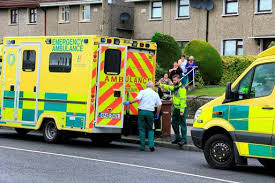