By Michael FitzmauriceApril 24, 2017No Comments

The paltry figures for the building of local authority houses around the country are shocking in the midst of a major housing emergency and the fault lies at the systems that exist in the the Department and this has to be addressed immediately.

I have to acknowledge that Minister Coveney is doing his best to sort out this crisis but it is clear that we have a serious problem in the Department where their systems to deal with the building of local authority houses are not fit for purpose and someone will have to get in there and sort it out as soon as possible. There seems to be more interest in completing drawings and filling out forms than getting the work done . Unless we treat this crisis seriously at all levels there will be no solution any time soon.

Remember also that apart from anything else, local authorities building houses will also create local employment. The Minister will have to oversee the introduction of a system wherby the building of local authority houses can be fast tracked and let’s get on with the work in every county. 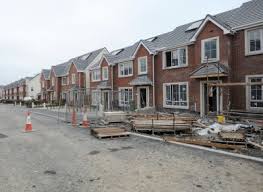